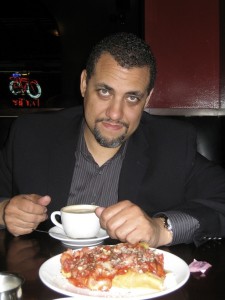 Hello my name is John Witt and welcome to my site. Let me begin by telling you a little about myself. I was born in New York City and grew up and spent a large part of my life in the borough of the Bronx. I am part German, American Indian (Cherokee) and African American. My father was born in Tennessee and my mother in Heckenbeck , Germany. They met in Austria where my father was tending bar and my mother was vacationing. I have a brother Andreas who resides in Venice, CA. My father passed away in California a year after we moved there, my mother still resides there. I have family in Tennessee, New York, California and in Germany. I try and vacation in Germany when ever I can squeeze it in. Germany is a very beautiful country both for its scenic sites but also for its food and beer. I do speak some German, after spending about a week there I almost speak fluently. I guess without practice one can lose a language.
I graduated from Cardinal Spellman H.S. in 1985. I then went to New York Institute of Technology where I majored in Electro Mechanical Computer Technology. I met Lara during my third year at NYIT, she would later become my wife. I moved to Arroyo Grande, California in 1992 where I resided for 2 years before returning back to New York . Arroyo Grande is on the Central Coast of California about 3 hours north of Los Angeles and 4.5 hours south of San Francisco . It was a beautiful area to live in however it did not have a very large technology job market. My choice was either to go north to San Jose , San Francisco or South to Los Angeles . Rather than move to a new city I decided to move back to New York . When I returned to New York I took the position of Technical Services Manager of CompUSA in White Plains upon their Grand Opening. I remained With CompUSA for several years where I obtained most of my industry certifications for the repair of PCs (HP, Apple, IBM, Toshiba, A+). I left CompUSA to design 2 On-Line Stores that sold perfume and restaurant supplies. It was here that I learned most of web design and graphic skills. I used a web server called Commerce Builder that used a custom programming language to do server side includes out to an Access database to run the E-Commerce sites. After the two stores were designed I joined ComputerSmart where I was the Director of Technical Services and sat on the Board of Directors. When ComputerSmart dissolved I was left with the choice of finding employment with another company or starting my own company. I decided on the latter and Lanactive Inc. was born in July 2004. I had a very loyal following of clients which made it that much easier to go into business for myself.
I now reside in White Plains , NY with Lara who I married after dating for 8 years in 1995 and our cats Maska & Neka. Maska & Neka are tabbies which we adopted from the North Shore Animal League. They are adorable but at times can be overly rambunctious
For the most part, this site’s main intention is to keep me up to date with technology in designing sites. In my current position I have no time to design sites for our customers any more. Secondly, it is a way for me to pass on things that I have experienced and enjoy doing and may be of some aid for someone else. Thirdly it helps me keep in touch with my relatives through my photo album and happenings section.