I was on my way back from a vendor meeting in New Jersey when I saw this on the turnpike. Not sure what it was but I would guess it’s a Civic RV. I had to share this picture with everyone. 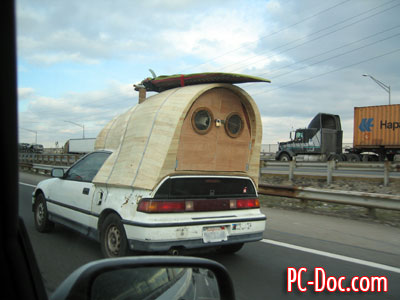 I have implemented various firewalls through out the years, but I can say with confidence that the Symantec lines of firewalls are the worst I have ever used. Well at least the 1620, but the entire line utilizes the same software which seems to be the underlying problem. I was installing two units in a failover configuration for an insurance company I service as well as a media buying firm. Both were being setup using content filtering with user authentication against their Active Directory. That’s when I came across a bug that dumb founded the Symantec support desk. Evidently there is an issue with having different levels of content filtering depending on which Active Directory group a user belongs to. I couldn’t believe that no one else has come across this bug before. They bumped this up to their global support group and to the developers. Three days later they still couldn’t give me a fix even though they were able to replicate the problem in their own labs. The real fun part was when I was informed by the support tech that Symantec was ceasing selling their hardware firewalls. That was enough for me to pack up the units and move to a Sonicwall solution for both clients. We have been extremely happy with the Sonicwall solution thus far.