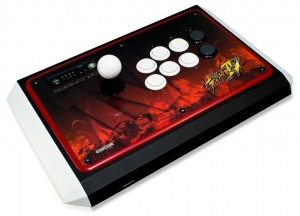 As many of you know I am an avid gamer. I have been trying to purchase a pair of Mad Catz Street Fighter IV Tournament Sticks ever since they were announced. I have the game but to play the game with stock controllers is not that fun and difficult. The controllers go for $149 but have not been in stock anywhere since they were released. If you look on eBay and some Amazon vendors everyone is marking these controllers up an additional $50. Well it would seem that now Mad Catz wants to make a little extra money as well. Now that Mad Catz has some controllers in stock they decided to get in on the action and fleece customers as well. They are forcing everyone that wants one of these controllers to buy a bundle. The bundle includes the game and a face plate. Well guess what I already have the game and I don’t want a faceplate. Keep in mind I need two of these one for myself and one for my wife or guest. Do I really need two games and two faceplates? NO! It’s a shame when even the manufacturer gets involved in this shady practice. Just thought I would let you know what they were doing.
UPDATE: My mistake the reaming is even worse. The bundle does not contain a game at all these are the items in the bundle:
Official Street Fighter™ IV Xbox 360 Tournament Edition FightStick™
Official Street Fighter™ IV Faceplate and Console Skinz
Official Street Fighter™ IV Vinyl Wall Scroll
Xbox 360 Controller Extension Cable