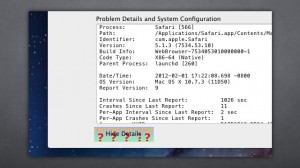 Apple updated OS X to version 10.7.3 today, which fixed a number of minor issues—but caused many big ones with some users. If you’re finding that apps are crashing as soon as you launch them, here’s how to fix it.
This bug isn’t affecting everyone, but it has affected a large number of users. Essentially, if you updated via Software Update—as most of us do—you might have found that every app you launch crashes, prompting a very weird dialog box with buttons reading “CUI CUI CUI”. Apple has yet to make a comment on the issue, but if you’ve been afflicted, Macworld offers this somewhat difficult solution: