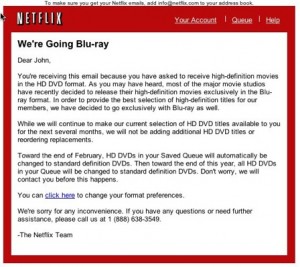 HD-DVD is dead, so says Netflix! I received this in my email today. It seems that Netflix has declared Blu-ray the winner in the format war. It doesn’t mean much to me since I have both players. In my humble opinion I always saw HD-DVD as the superior format as to what it had to offer compared to Blu-ray. I guess it all came down to whoever could throw the most money around to influence the studios would win. I guess getting one of the four formats to mass adoption was worth throwing all that money around. Having a fourth proprietary format fail would have really hurt Sony as far as being an innovator. The other failed formats being BetaMax, ATRAC and MemoryStick. To this day I still don’t understand why they peddle memory stick format for the majority of their cameras and their PSP.